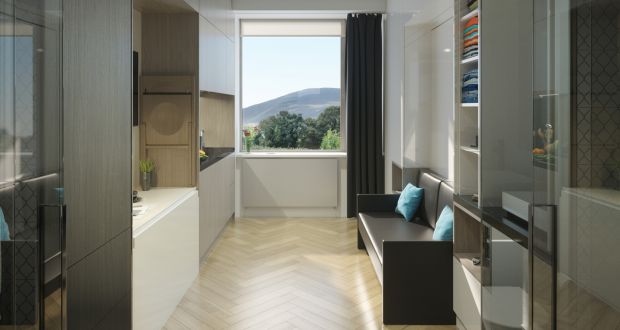 Small but perfectly formed: Is co-living the new co-working?

Co-working spaces such as WeWork, Dogpatch Labs and Iconic are now well established in Dublin, providing (mainly) millennial freelancers, contractors and remote workers with an alternative to working from home, or Starbucks.

Hot on its heels comes co-living, which rounds out the concept by providing them with somewhere to lay their head as well.

The idea is to provide small but well-designed en-suite bedrooms alongside large and equally well-designed communal spaces, in which residents co-cook, co-eat and, indeed, co-work.

It’s already here. Dublin’s first co-living space, Node, opened last year on Pembroke Street, and filled up fast, with rents from €1,300 upwards. It is hard to know how much of its success is down to the accommodation crisis, and how much down to the concept, but founder Anil Khera made it clear he is looking for more properties in the city.

UK co-living company The Collective has also moved into Dublin, buying a property in Fumbally Lane, Dublin 8. It already has a co-living and co-working space in London, Old Oak, with 500 tenants.

Right now, Dublin looks ripe for the concept. In 2013, what had been a key part of the capital’s accommodation offering – old-style bedsits – were outlawed. Though the move was intended to improve conditions for renters, it inevitably reduced the supply of affordable accommodation.

Last year saw something of a change in the Government’s mindset, as Minister for Housing Eoghan Murphy introduced changes to the minimum apartment size guidelines.

The requirement for car-parking spaces was removed and the cap on the number of units allowed on each floor increased. It was curtains for dual-aspect – the necessity for apartments to have windows on two walls. Late last year, height restrictions in cities were dropped.

The scene was set, in other words, for co-living. In its Q1 2019 quarterly report, estate agency CBRE suggested “an increasing number of investors are now looking for opportunities to invest in the development of micro-living and co-living concepts, which they perceive to be particularly appropriate in a Dublin context”, predicting an increase in the volume of planning applications for co-living concepts.

“It wasn’t possible to do this until Eoghan Murphy changed the planning code last year,” says Marie Hunt, executive director and head of research at CBRE.

“Up until then, the planning code stated things like if you want to build an apartment it has to be much the same regardless of who was in it, with things like dual-aspect and a car- parking space whether you wanted it or not.”

The rise of build-to-rent, where apartment blocks are sold en-masse to investors such as Ires Reit and Kennedy Wilson, demonstrated the demand for new approaches to apartment development. Co-living is the next “iteration” of this, Hunt says, describing it as “a bit like student accommodation, with small bedrooms and big communal spaces”.

It’s not for everybody but then it’s not designed to be. As with co-working, the early adopters will likely be tech-savvy millennials.

“It’s really for the tech workers who work 18-hour days and just need somewhere to get their head down and, from a social point of view, a community to network with, particularly for workers who have come in from overseas,” says Hunt, who has visited such spaces in other countries.

In places like London the bedrooms are like shoeboxes. Here, the planners are saying, it seems, we can do better than that

“I haven’t seen very many but in places like London the bedrooms are like shoeboxes. Here, the planners are saying, it seems, we can do better than that. We don’t want to build them too small and have all the problems we had in the 1970s and 1980s, when apartments were too small with no storage.”

Co-living spaces are not forever homes. “They are more likely for key workers who will be coming in on three-month contracts and, just as people who choose, say, a Hyatt hotel in one country will choose a Hyatt in another, the idea is that these co-living spaces will operate around the world too, with similar design, furniture and feel,” Hunt says.

Much of the appeal of co-living comes from the rise in home working. Co-living spaces will all have desks, “but you’re not back in bedsit-land. It’s more social, more about the community. In fact, while we think of it as being all millennials, in other countries co-living has in fact proven a popular solution for a mix of ages,” says Hunt.

It’s not for every city, however. “The reason Dublin fits is because of the high volume of tech operators we have here in from the US and used to this kind of living. To them, it’s not an alien concept. The quality is top-notch and you pay one rate each month including utilities, with no 12-month lease – it’s all short term.”

It is, in fact, akin to HaaS – to borrow from tech-speak – housing as a service. Right now, all interested eyes are on what is happening with Niche Living, a prospective co-living development by Richard Barrett’s Bartra Capital.

It has appealed to An Bord Pleanála against a recent decision to reject its plans for a 105-unit co-living space in Rathmines – fittingly enough, ground zero for bedsit-land.

Dublin City Council rejected Bartra’s original plan as “over-development” of the site due to concerns about height and fears it provided a “poor standard of residential accommodation”.

The removal of height restrictions, however, makes the former a moot point, while the developer has responded by saying the development was both top quality and more than one third larger than minimum standards.

“We’re not looking to replace apartments, we are looking at it as an opportunity to bring something new and innovative to the residential market,” says James Cormican, head of development co-living at Bartra Capital Property Group.

“Our target market is 25- to 34-year-old millennials who have slightly different needs and want. The types of work contracts they have are changing. A lot of them are self-employed, on shorter-term contracts and are highly mobile. They move internationally both to follow the work and also because they want to experience different cities. Co-living is a response to that lifestyle and that need.”

He too points to Dublin’s teeming tech sector as a primary driver. “If you look at the tech companies you will see the huge amount of rolling employees coming in and getting training and going out into the accommodation market but not being able to compete in the regular rental sector, so they go to hotels and end up displacing tourists from hotel beds, who in turn go to Airbnbs. Our accommodation is for that sector – not the short term, nor the long term, but the medium-term segment of the market.”

At present, there is an estimated shortfall of 450,000 apartments across Ireland, with 200,000 too few in Dublin alone

At present, there is an estimated shortfall of 450,000 apartments across Ireland, with 200,000 too few in Dublin alone. Any co-living development hoping to compete for highly skilled millennials will, however, have to compete on design. “Expectations are very high, but standards are very high too,” says Cormican.

At Niche Living, as well as a high-spec bedroom – with a nifty pull-down bed that transforms the space by day – residents also get a cinema, gym, laundry, workspaces, roof terrace and a dedicated events organiser to help build a sense of community. Prices will be at a discount to rent for a one-bedroom apartment in the area and will include all utilities, including cleaning and Wi-Fi.

The worry for Cormican, however, is that any push to make rooms bigger will have an impact on the project’s raison d’être.

“We can do bigger rooms but it’s a trade-off, because you are pulling from the amenity space, so at what point are you simply going from co-living to build-to-rent? This isn’t build-to-rent, this is shared living,” says Cormican.

“We are not just building to sell on. Others will come into the market after us and try and improve on us, so we need to come in strong.”

Many will be watching, including renters and future developers alike. “Once it gets through it will provide the template for the rest,” says Marie Hunt.

To read the article in full, please click on the following link:
https://www.irishtimes.com/special-reports/business-ireland-magazine/small-but-perfectly-formed-is-co-living-the-new-co-working-1.3858501#.XMAI0jHedQM.mailto